6 miles west of the Jordan River and 10 miles north-northwest of the north end of the Dead Sea. (Rasmussen, 2008)

“'Abel was a keeper of sheep, but Cain was a tiller of the ground.’ (Genesis 4:2) Cain’s son Enoch had built a city (Genesis 4:17). Tubal Cain, the eighth generation from Cain was ‘an instructor of every craftsman in bronze and iron.’ (Genesis 5:22) Canaan is the grandson of Noah (Genesis 10:6). He and his descendants settled down in the land of Canaan and built the ancient city of Jericho (Genesis 10:19).” The fortified city of Jericho had used the Double Redoubtable Wall construction system that was used to build fortresses in Europe during the Medieval Age. A Double Redoubtable Wall is casemate wall with two layers of wall that are at different height. The Bible tells us when Jericho fell, 1 Kings 6:1 states the fourth year of King Solomon’s reign over Israel. Jericho’s walls fell 400 years earlier, so we can estimate that Jericho’s walls fell in about 1400 B.C. Dr. Garstang, Director of the Department of Antiquities in Palestine, and his assistants examined over 100,000 potshards from the excavated site of Jericho and from these he estimated the destruction of the city to the middle of the Late Bronze Age (c. 1400 B.C. in conventional dating) (Wong, 2009) The bible and Dr. Garstang’s estimations seem to be in agreement. Fig. 1 shows a view of the tel of ancient Jericho. Fig. 2 is a closer up view of the tel.

Fig. 1: "View from the northwest looking southeast.  The long brown mound of dirt - in the center of the photo - stretching from right to left is Tell es-Sultan (Old Testament Jericho). Note its position in the green oasis. One of the powerful springs that feed the oasis of Jericho is located just on the opposite (east) side of the mound. The tel is about 10 acres in size - which implies about 1,500 people could live within its walls." (Rasmussen, 2008) 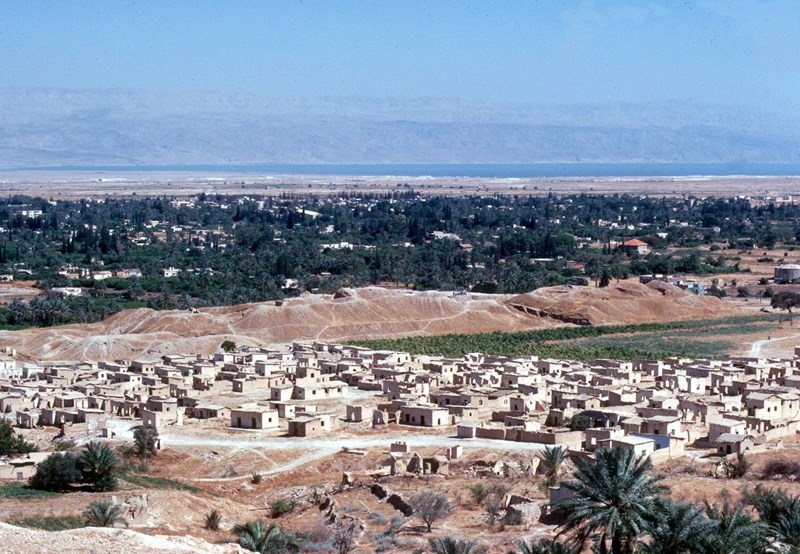 Fig. 2: "This photo was taken on top of the tel (remains) of the ancient city of Jericho." (Wiemers) 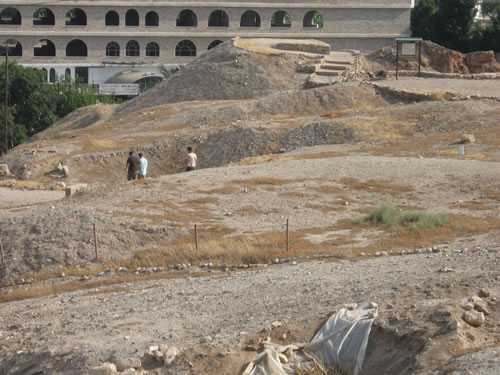 Author was unable to find "Duration of construction."

"Excavations at Jericho have revealed that it is one of the oldest cities in the world. It was occupied continuously, with occasional interruptions and destructions since circa 8000 BC, until about 1500 BC when it was destroyed for a final time, never to be rebuilt. For our purposes here we are concerned with the Bronze Age period.

Archaeological remains show that Jericho flourished as a major city from about 3200 until about 2200 BC when there was an abrupt break in occupation. At this time, the strongly fortified city was destroyed by a heat so intense that the bricks of the walls encircling the city were burnt red right through the center.

The site was rebuilt and reoccupied; but after 2000 BC, an entirely new system of defense was introduced here - the glacis or scarp-type of fortification. This system of defense is not only found at Jericho but also all over Palestine, northern Syria, and even in the delta of Egypt. Its invention is usually attributed to the Hyksos.

The system of defense consists of a steeply sloping scarp of soil surfaced with brick, tile, or plaster, surrounded by a stone wall and a moat. At the top of the sloping scarp or glacis is another wall.

Thus at Jericho, a reconstruction of the defenses shows a stone revetment ten feet high [3.08 meters] and a plastered slope at an angle of 35 degrees running to a height of 35 feet [10.77 meters] above the revetment. On its crest there is a high wall of brick; this brick wall thus stands back from the stone wall at the bottom of the slope a distance of 65 feet [20 meters]. A cross-section of the defense fortification reveals its formidable appearance.

"After 2000 BC, many of the cities of the west were defended this way. It meant that there was a common culture or organization which bound all these cities together. This common bond was the military engineering genius of the Rephaim."(Boulay, 1990) 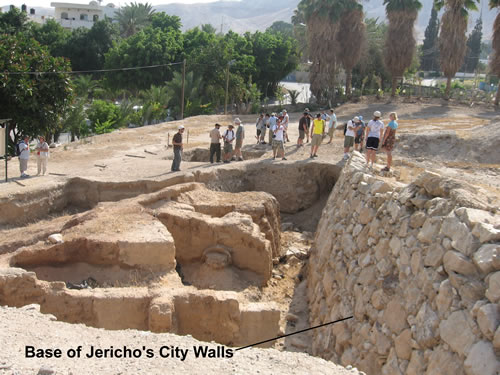 Fig. 4: This is the outside base (retaining wall) of one of two walls going around Jericho. The wall that collapsed in Joshua's day would have been built straight up on top of this angled retaining wall. This retaining wall would have itself been higher than the remains show. (Wiemers)

"Reconstructions of the walls of Jericho suggest that there were two walls: an outer mud brick wall - which was built on top of this revetment wall - and an "inner wall" - located higher up (off the picture to the upper left) on the mound. Bryant Wood has suggested that this revetment wall, and associated mud brick walls, were not destroyed in 1550 B.C. (the "traditional" ending of the MB II archaeological period), but rather continued in use into the Late Bronze Age - being destroyed in the conquest of Joshua, about 1400 B.C. "(Rasmussen, 2008)

"...in reality what Kenyon, Garstang and other excavators have found at Jericho correlates precisely with the account in the book of Joshua. They found collapsed walls, not walls that were broken down from the outside but that had fallen down (Jos 6:20). The walls had not fallen inward, but outward, creating a ramp of fallen bricks by which the Israelites “went up into the city, every man straight before him” (Jos 6:20)." (Ashley, Aust, 2008)

"Garstang found fallen city walls, burned stores of grain and evidence of destruction of the city by fire, all of which he dated to about 1400 BC—right in line with the Biblical chronology of the city’s destruction." (Ashley, Aust, 2009)

Fig. 5: Pottery in Jericho's rooms by the wall. The city was filled with grain which indicates two things: 1) the city was not plundered since grain was very valuable as a trade commodity and would normally have been taken. 2) The city did not undergo a long siege which normally included months of being trapped in the city and starved. This city fell to its enemies suddenly. 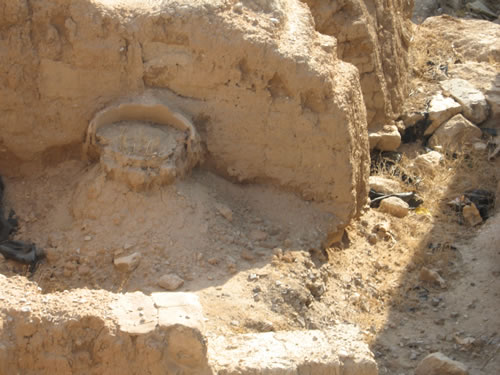 Calculation example - Find the bearing of an apparent dip (two symmetrical to full dip directions), given the rate and direction of full dip

Given the rate and direction of full dip of a pla...

Calculation example - Find path gradients in different directions, given the rate and direction of full dip

Given the rate and direction of full dip of a plan...

Given the rate and direction of full dip of a plan...

Sinkhole opened up in private pool: one man found dead after being swept into

Uganda, Kenya: A new dam to provide water and electricity to five towns

Longest bridge in the Baltics: the estimated duration of the Neris bridge works is 2.5 years